There's something wrong with your new cat.

A ghost story about small creatures and the harm we do to each other.

Consider supporting me on Patreon!

This was crazy. I don't know what I expected, but it definitely wasn't that. I love this story, it seems like something Edgar Allen Poe or H.P. Lovecraft would write. I loved it, chose a very disturbing ending (I'm not crazy, I promise), and think that you should definitely write a book or something. Much respect.

Before an actual comment, i like how when you look under your bed, it says "it's not that kind of story, so there's nothing there."

Awesome! The Cat That Walks By Itself has joined my mythos pantheon alongside The King in Yellow. ;3

alma scares me more then the cat ever did, because people like her exist in real life

Reply
4re2 years ago

this is so meaningful and... just wow

Well damn. Look at you being all multi-talented. Solid work.

This whole story turned from uwu to ohmygod i'm a crack addict alcoholic and somethings wrong with my cat
It's literally so well made i'm crying. have no idea if i'm supposed to be amazed or scared about what i read

This was really interesting! I'll probably replay it later, give it a more thorough read. The art is simple, but works really well, and there's some really unique language here. Out of curiosity, which of the endings do you think is the 'good' ending of the game? If there is one

Thank you so much for playing! I don't really think of any of the endings as being the "good" one, tbh, although the "Solipsistic Bitch" ending comes closest to being a healthy resolution, I guess...?

hello! i just finished getting all the endings and i wanted to tell you that i really enjoyed it! the writing was absolutely fantastic, and all the art that appeared every now and again had me staring at the screen for minutes (though often simple, the style and colors were just… wow). it was really interesting to read about the dynamic of the relationship to their brother and the ex. all in all, it was such a engaging story wrapped up in words and art that really gave it life. sorry if this review isn't very good. i actually just made my account to leave this comment, and i haven't reviewed many things before. it was just really good. i agree with DragonExplosion that there could be things that would further enhance the experience, but there's already so much here that's just so good??? i'm kind of fumbling around with my vocabulary to find the right words to say about this.

but anyway! apart from that, i believe i may have found a glitch, so i wished to inform you of this also! the first ending i got was "Not Good with Animals", and when i rewound to find the rest, i got a note that said something along the lines of "here is where the story splits. since you went down the brother's route last time, why not try Alma's?" (i really can't remember exactly). it never appeared again after that, and i technically hadn't gone down the brother's route yet, so i assume it wasn't supposed to appear. i'm thinking it may be something with a variable? i imagine that's how'd you would store which route they (the player) went down first. perhaps it's default is set to "brother" and it was just never written over? i'm not really sure how you coded this exactly. my brain is just running on overdrive and i keep thinking excessively. sorry! anyway, amazing game!

wait wait wait i got interested on how'd you code one of these so i inspected the page and i think i found something?

at the beginning it looks like it sets $ending_counter to 0, and overpet, abel, solipsism, kipling, and recursion to false, so it couldn't be anything like a default "setting" like i suggested before (i'm not the best at code terms). however, it uses an if/else statement, in which it assumes you had previously gotten past the part in which you chose a route. if you've gotten the kipling or solipsism route show [message], else show [the other message]. however, for the "overpet" ending, it's an early bad ending and you never choose a route and the code goes to "else", which is "You followed the brother's route last time". it's a small bug that's not that big of a deal, so sorry for like… being a nerd or something. but also not sorry, because i'm a nerd and i had a lot of fun figuring this out! :>

Ahh I see what happened here. Good catch! I'll push a patch in a couple days. Thank you so much for your great comments!

I might not know video games--I think it got stuck. I checked the doors and then under the bed, and the game came up with  /  / ... meaning that it's stuck and I'll have to start over. (It won't let me pick any of the options, and the bottom one is just the top one repeated instead of saying the thing about doors.) Unless that's how it ends?? I could be wrong ;^^

Sounds like a bug! I'll look into it; thanks for letting me know!

Edit: Looks like there was a typo in the conditionals. It should be fixed now! 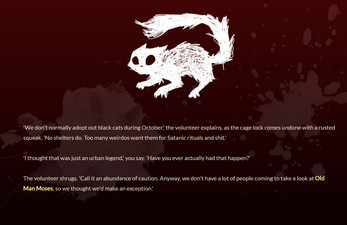 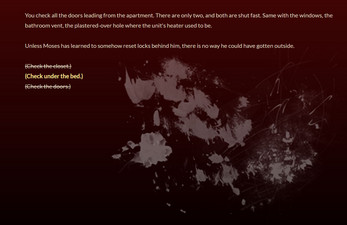 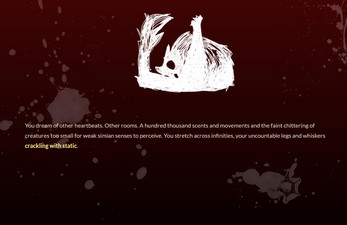 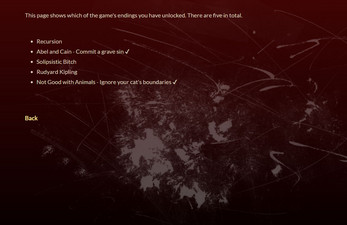